Despite this bird's broad geographic distribution in western North America, it is one of the least studied owls on the continent. Its habitats range from deciduous bottomlands to high-elevation coniferous forests. They also live in cottonwood, aspen, and mixed-conifer forests. Their home range is up to 185 acres or 75 hectares and our ranch, Whistling Kettle is 214 acres.

Listen to the primary hoot and chitter calls of a Northern Pygmy owl.

These owls employ a 'perch and pounce' hunting tactic.They mostly eat small birds, such as hummingbirds, chickadees, warblers, and sparrows, as well as small mammals, including shrews, moles, and chipmunks. However, they occasionally attack prey much larger than themselves, such as Northern Bobwhite and California Quail. They also eat insects such as beetles, butterflies, crickets, and dragonflies, as well as reptiles such as lizards and skinks.

ENEMY:
Barred Owl
Douglas and Grey Squirrel may predate on eggs and chicks


Northern Pygmy-Owls nest in holes in trees. They lay their eggs in the debris at the bottom of tree cavities, where there may be wood chips, decomposing leaves, or nests of other birds. Sometimes they add linings such as feathers, strips of cedar bark, and moss. Breeding birds begin to defend nest cavities and territories as early as late February. Breeding begins at one year of age, birds breed every year. The owls are rarely seen during the breeding season.

The Northern Pygmy-Owl hunts mostly by day. They fly in an undulating pattern of rapid wing beats interrupted by closed-wing glides, similar to woodpeckers. The main predators of Northern Pygmy-Owls are larger owls and raptors as well as some mammals such as weasels. Small birds such as nuthatches, robins, crossbills, wrens, creepers, hummingbirds, blackbirds, warblers, and jays frequently mob Northern Pygmy-Owls as they do other raptors—this behavior seems particularly bold considering small birds are what pygmy-owls eat. Some people have suggested that the eyespots on the back of the Northern Pygmy-Owl’s neck help deter mobbing birds. 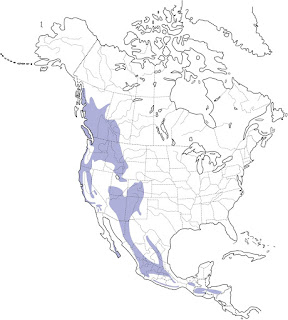 This article from the High Country News - Oregon has photos of a hand holding a Pygmy owl to illustrate its size or lack thereof. as well if you scroll to the next image you will see tiny owlets in a nest.