Last weekend, during a snowshoe adventure down to our river I came across something I'd never seen before. Puzzled, I emailed Mark Forsthye from CBC's BC Almanac. He and I exchanged few emails and after a some research I discovered a plausible answer to my mysterious crystals. 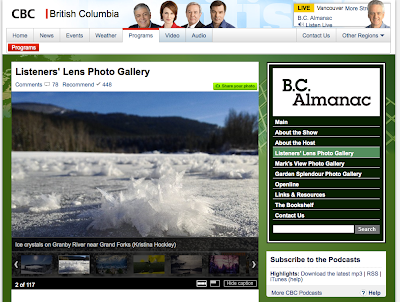 Thanks to Kenneth G. Libbrecht, Caltech webpage I learned that these ice dendrite stacks grew complex branches because of a high pressure system that day and rapid changes in the temperature (cold cold night and direct sun on the surface of the river). Possibly fog along the river's surface, sun melt on the surface layer of the river all contributed to this bizarre natural phenomenon. From Kenneth's website:

"When the branching instability applies itself over and over again to a growing snow crystal, the result is called an ice dendrite.   The word dendrite means "tree-like," and stellar dendrite snow crystals are common.  So consider a flat ice surface that is growing in the air.  If a small bump happens to appear on the surface, then the bump sticks out a bit farther than the rest of the crystal.  This means water molecules from afar can reach the bump a bit quicker than they can reach the rest of the crystal, because they don't have to diffuse quite as far.

With more water molecules reaching the bump, the bump grows faster.  In a short time, the bump sticks out even farther than it did before, and so it grows even faster.  We call this a branching instability -- small bumps develop into large branches, and bumps on the branches become sidebranches.  Complexity is born.   This instability is a major player in producing the complex shapes of snow crystals." 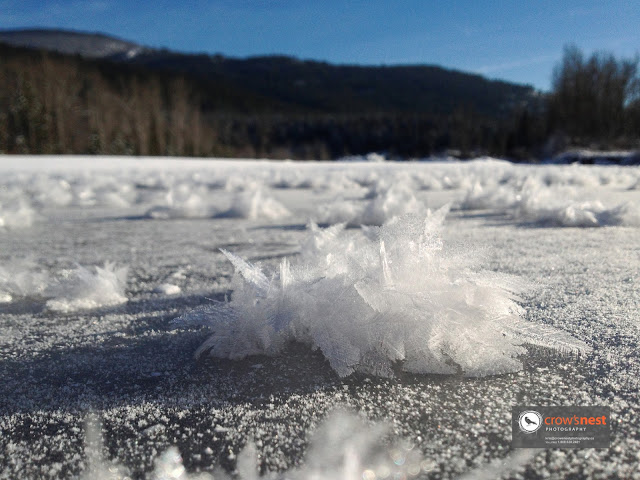 Posted by Kris Hockley at 12:52 PM No comments: