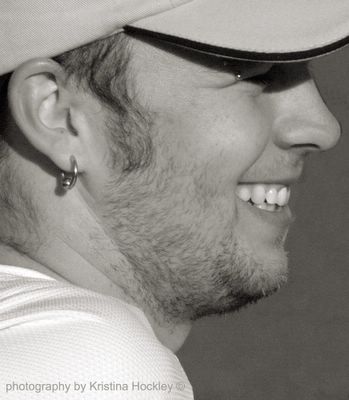 Terry was born in Calgary, Alberta but his nomadic family moved him around all over Canada in his early years. Perhaps one of the original trailer park boys?! He currently resides on the Westside of Vancouver, BC

His love of Ultimate is based on the overal 'pure athletic' nature of the game.

T.R. "Ultimate is a very team oriented sport, everything that is done on the field should be done for the better of the team and not the individual. Despite the fact that it's a team game, it is the one on one battles that can change the outcome of the game. You win these battles consistantly as a team and you will most likely win the game. Its the individual battles that keep me coming back for more as its a constant challenge. This combined with the pure athleticism (needed to compete at a high level) is why I love the game. It truly is the 'Ultimate'"

Since 2000 Terry has played through the seasons and in countless tournaments. One of his favorite tournaments was organized by Art who happened to also be the head observer at Nationals as well as an active member on the VUL board. The game was called Eliminations 8's : starting with eight players and when you score you lose a player. Terry says that most of the time the game ends up being tied 6-6 and the final point is 2 on 2. Winning both times he played final points with female players he thought very highly of and enjoyed copious amounts of Sangria.

The new millennium brought Ultimate to Terry...before that he had never heard of the game. Shannon, his lover at the time convinced him to sign up for a team called Tubthumpers. Quakers was the following year, which evolved into the current day team of Constantinople (Monday Div 1). Terry has also played for ToeJam which evolved into Bubba, and currently Joyride. Last year Joyride challenged Nationals for the first time and they are gearing up as you read this to be an even stronger contender for this season's nationals.

Terry, a closet cleat-a-holic, searches the far reaches of the earth for shoes that will endure the challenges of the game. His new Nikes should be arriving with in the next few weeks along with two pairs of Umbros (one blades one studs) from the UK! Incidentally, Terry noted that the Nike cleats are red and white which matches his jersey from Team Joyride. I like this guys sense of style and sport!

you can reach Terry at g_umby@hotmail.com 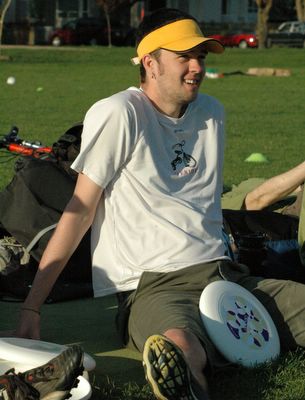 Constantinople practise at Douglas Park, April 2005.
Posted by Kris Hockley at 11:27 AM